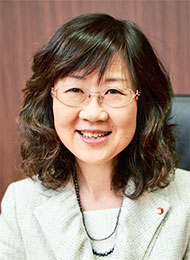 Both the School of Nursing and Graduate School of Nursing have established international exchange agreements with sister universities in the U.S., China, South Korea, and Thailand. These agreements provide opportunities for undergraduate and graduate student exchanges, joint research, and international symposiums. International programs were launched in the Master’s Program in October 2012 and the Doctoral Program in October 2014, both of which are now actively admitting exchange students from overseas.

The key missions of the Graduate School of Nursing are to take up pioneering challenges that promote innovative nursing research and create advanced educational programs in order to become a core institution for fostering educators and researchers in the rapidly expanding field of nursing and health science. To achieve these missions, we have implemented a 10-year strategic plan starting in 2015 for developing the new curricula to enhance capabilities of conducting research, multidisciplinary collaboration, and global communication. To our future students, we are committed to supporting your efforts to expand your knowledge and expertise in the field of nursing with dedication and passion while leveraging the resources of the Graduate School of Nursing, and to enhance your problem-solving abilities to pioneer new developments in the field of nursing. We look forward to growing and learning with you.